How can we help you today?

How do I wire an external switch for a Mastermind GT/LT/PBC? Print

The Mastermind GT, LT and PBC can use external switches to act as additional buttons. These buttons are fully programmable and can do anything that the built-in buttons can do, with the exception that external switches can have only a single color LED to indicate whether the switch is on or off.

The Mastermind GT can have four external switches, the Mastermind LT and PBC can have two. The switches are connected using 1/4-inch TRS jacks. Each jack can accept a single or dual footswitch. The tip corresponds to the lower numbered switch, the ring corresponds to the higher numbered switch. The switches should short to the connector sleeve when pressed. 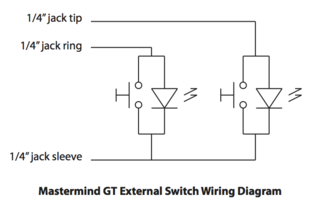 External switches must be momentary and normally-open. They don't need to have an LED in order to function, but if an LED is installed, it must be installed in parallel with the switch. Use only LEDs that have a forward voltage of less than 3 volts. Red, green, yellow and orange LEDs all work. Blue, violet or white LEDs will probably not work.

We sell single and dual button footswitches that are similar to amp footswitches. These have a red LED over each button and are wired to allow the GT, LT or PBC to control the LED.

The Boss FS-5U is a momentary (unlatched) footswitch with no LED indicator. It will work as an external switch if you set the Polarity switch to II.

The Boss FS-7 is a compact, dual footswitch. It will work with our products if you follow these guidelines:

The FS-7 has LEDs, but they will only light when the button is being held - the LEDs will not be able to be controlled by the GT or PBC like RJM external switches can.

Did you find it helpful? Yes No

Send feedback
Sorry we couldn't be helpful. Help us improve this article with your feedback.